The ever-glorious crown of Miss Universe has now found its new owner. So, this year, the new owner of the crown is Harnaaz Sandhu, an Indian girl, from Punjab. The world has witnessed it’s Miss Universe 2021 on 12th December.

So, it’s worth noting that the competition took place in Eliat, Israel on 12th December this year. Moreover, this is the third time that an Indian has won this prestigious crown. Previously, it was Lara Dutta and Susmita Sen who brought glory to the nation of India by winning the competition. Now, another Indian, Harnaaz Sandhu, the girl from Chandigarh has won this crown as well.

Moreover, it’s also worth adding that she is also the winner of Miss Diva Universe 2021. In addition, she has also won numerous beauty pageant crowns and awards in her lifetime.

It’s an amazing feat and something that she can be proud of. In fact, the whole nation is on its feet cheering for Harnaaz Sandhu as she has brought joy to numerous people in this country. 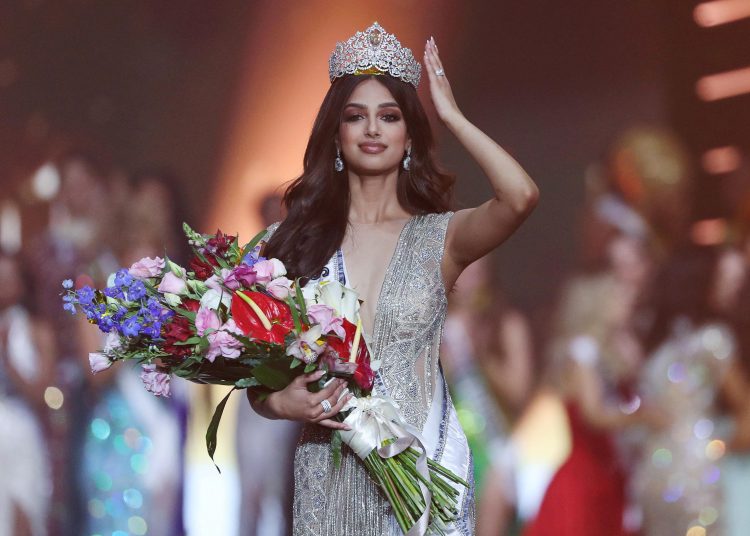 We can say that it was an amazing journey for her. So, if you wish to know more about Harnaaz Sandhu’s journey to becoming Miss Universe then you are at the right place. In this article, we will also provide you with a few details of her life as well.

In order to fully know her journey, it’s important to go back to the roots. So, Harnaaz was born in the year 2000 on 3rd March in Chandigarh, Punjab, India. She is an Indian actress, model as well as the winner of the 70th Miss Universe Title. Moreover, it’s also worth noting that she graduated from Shivalik Public School and thereafter visited Govt College for Girls.

From the earlier stages of her life, she had an immense love for modeling and acting. Therefore, she participated in a lot of beauty pageant contests and even won them. So, it was her innate passion that started her journey towards becoming Miss Universe 2021.

Her Journey To Become The 70th Miss Universe 2021

Well, as we said earlier, it was her passion and love for modeling that started the journey. She began modeling while she was in her teenage years. In fact, Harnaaz Sandhu precipitated in multiple modeling as well as fashion events in her early years. Later on, she even went to compete in beauty pageants as well.

Her exuding talent, confidence, and beauty, helped her to win pageant titles, such as Miss Chandigarh 2017 and Miss Max Emerging Star India 2018. Moreover, she had also competed in Femina Miss India Punjab in the year 2018 and won it as well. In addition, she came up in the top 12 of Femina Miss India. 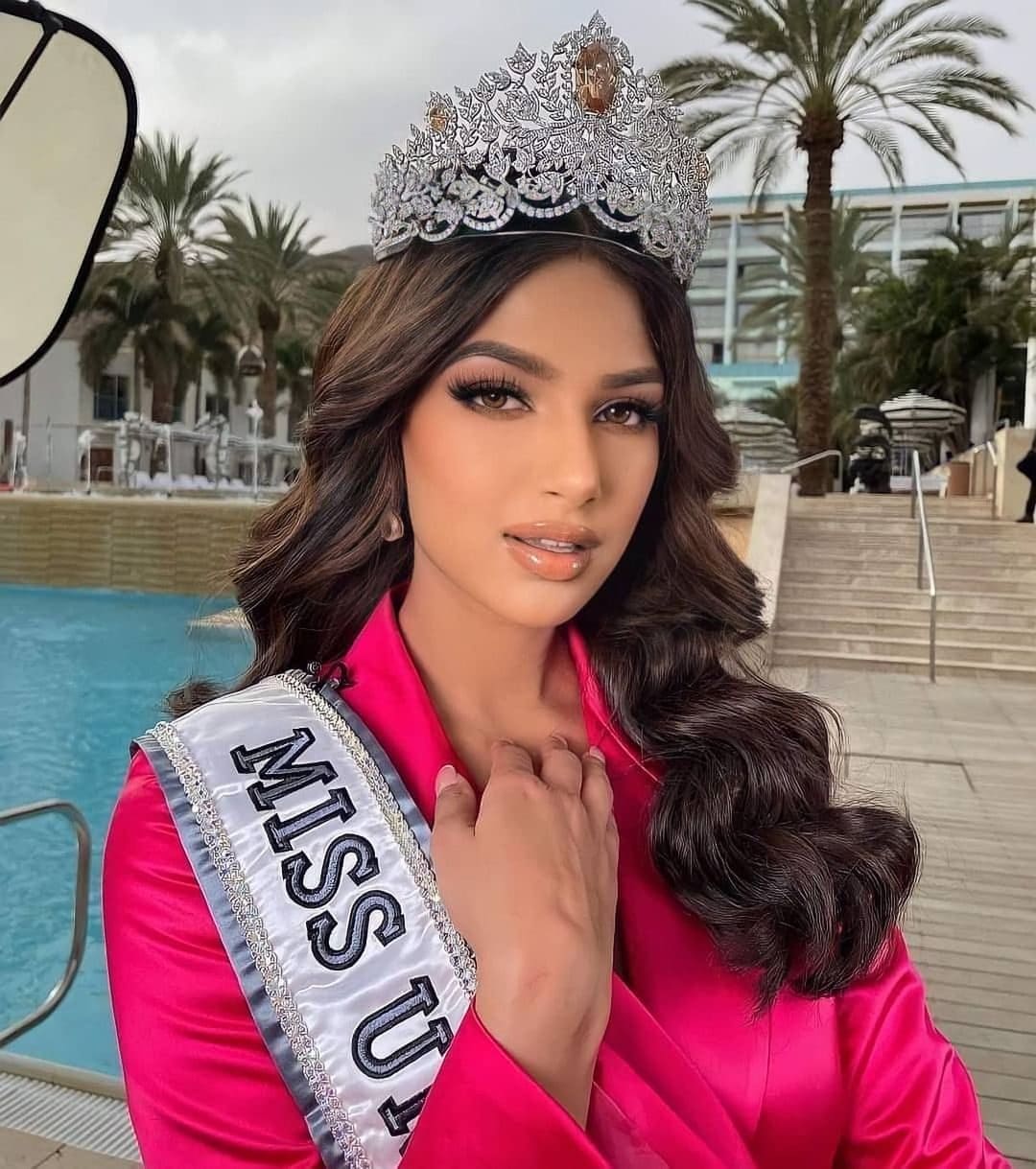 One of the major achievements of her life was winning Miss Max Emerging Star India in the year 2018. It was Infinite Mall in Malad, Mumbai that hosted the grand finale of that competition. Later on, she competed in Miss Diva 2021 and performed really well in that beauty pageant. At the grand finale, she awed the judges and won the crown.

This year, 2021, the most precious moment of her life finally came true. She represented India and won the prestigious crown of Miss Universe as the 70th winner. The officials held this most glamorous and prestigious beauty pageant competition in Israel, Eilat. From the initial pool of 80 contestants, Harnaaz Sandhu advanced to the top 16. Thereafter, she advanced to the top three and then earned the title of Miss Universe.

It’s worth noting that before Harnaaz Sandhu, only two Indians achieved this amazing feat of winning the Miss Universe title. They are Sushmita Sen (1994) and Lara Dutta (2000), respectively.

So, after 21 years, Indian Harnaaz Sandhu has finally won the crown. She represented India in the 70th Miss Universe 2021 contest, in Eliat, Israel. The 21-year-old girl from Punjab came out victorious and edged out Paragua’s Nadia Ferreira and South African Lalela Mswane to win the crown. The 2020’s winner of the Miss Universe contest Andrea Meza from Mexico crowned her with the glowing crown. 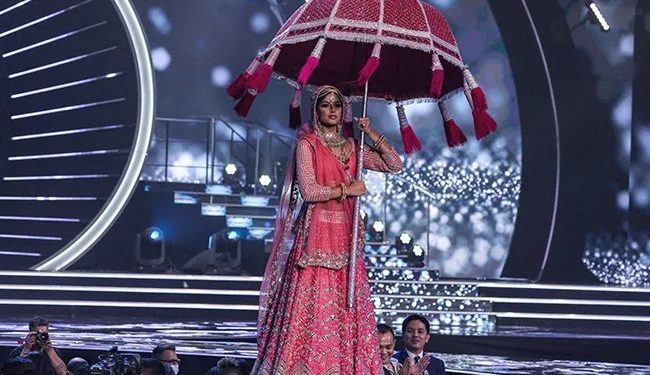 During round 3, Harnaaz Sandhu was asked what advice she would give to the young women in the world on how to deal with the pressures they faced. So, Sandhu, with her composure answered the question. She said,

“The biggest pressure the youth of today is facing is to believe in themselves, to know that you are unique and that’s what makes you beautiful. Stop comparing yourselves with others and let’s talk about more important things that are happening worldwide… This is what you need to understand. Come out, speak for yourselves because you are the leader of your life, you are the voice of your own. I believed in myself and that’s why I am standing here today.”

It’s worth noting that Sandhu has also worked in Punjabi films like ‘Bai Ji Kuttange’ and ‘Yaara Diyan Poo Baran’.

The Most Expensive Crown Ever

Harnaaz Sandhu has certainly made her country proud. She believed in herself and therefore achieved her dream of winning the Crown of Miss Universe. It’s an outstanding feat and something that’ll be fetched as history.

Take A Peek Into The Mysterious Lives Of DaBaby Kids